I’ve whipped up a new batch of shelves for the 2016 MCAD Art Sale, and here they are!
The Orbit Shelves- Series I & II. Each set of shelves of shelves has a large version (3′-4′ in length) and a small version (~24″ in length).
Series I is a design I first debuted in my senior show back in 2012, and like my original senior show pieces these geometric shelves feature a ballast made of stack laminated OSB turned on the lathe.

Then we come to the new models, the Orbit Series II, which have turned hardwood ballasts.

the black version of the series II contrasts the lighter turned maple with black dyed beech wood, with the edge left at the natural color to show off it’s stylish geometry.
Then I’ve flipped the color scheme for the second half of the Series IIs, dyeing the hardwood ballasts and leaving the shelves their natural color.

Last we come to my favorite of the new edition, a little orbit shelf made from a particularly spectacular bit of yellow heart. 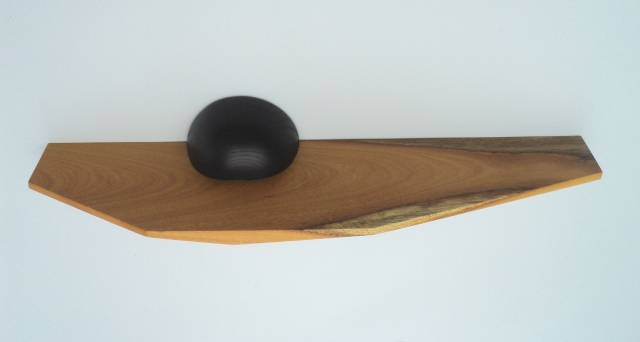 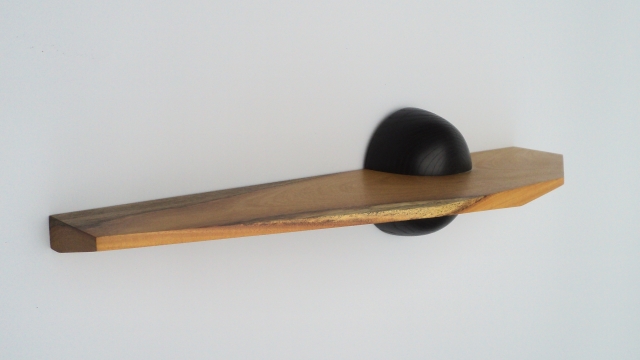 I fell in love with this little bit of lumber the minute I laid eyes on it in the cut off bin at my local woodworking store. Whereas somebody else must have seen it’s discoloration as a flaw I found it was the perfect character for one of my Orbit shelves.

With a black dyed maple ballast for a bit of contrast to the vibrant color I’m really quite proud of how this one turned out.

Aside from the 7 new shelves I’ve also put together an assortment of laser-cut paper pieces, including an all new design incorporating some some additional painting.

‘Mountain Fog’ is a piece inspired largely by my visits to the Minneapolis Museum of Art’s extensive collection of Chinese and Japanese painted scrolls and ukiyo-e prints.

I wanted to try something a little different from my older paper-cuttings so for this piece I decided to incorporate some paint into the piece before its final assembly. I used black and white spray paint to create a faux mezzotint kind of texture as a bit of a reference back to print making techniques, along with a bit of watercolor for some added vibrancy.
It was nice to add in some of these painting techniques as it makes each of this series of paper-cuttings one of a kind.

I’ve submitted a total of 25 pieces to the Art Sale, which is at MCAD (details for which can be seen here) anything not sold during the sale will be available on Etsy in the near future.

thanks to anyone taking an interest in my work- I hope you like what you see!
Until next time-
Ian Nystrom

Artist, designer, sculptor, builder.
View all posts by inystrom →
This entry was posted in Uncategorized. Bookmark the permalink.